MPEG news: a report from the 132nd meeting (virtual)

The 132nd MPEG meeting was the first meeting with the new structure. That is, ISO/IEC JTC 1/SC 29/WG 11 -- the official name of MPEG under the ISO structure -- was disbanded after the 131st MPEG meeting and some of the subgroups of WG 11 (MPEG) have been elevated to independent MPEG Working Groups (WGs) and Advisory Groups (AGs) of SC 29 rather than subgroups of the former WG 11. Thus, the MPEG community is now an affiliated group of WGs and AGs that will continue meeting together according to previous MPEG meeting practices and will further advance the standardization activities of the MPEG work program.

The 132nd MPEG meeting was the first meeting with the new structure as follows (incl. Convenors and position within WG 11 structure): 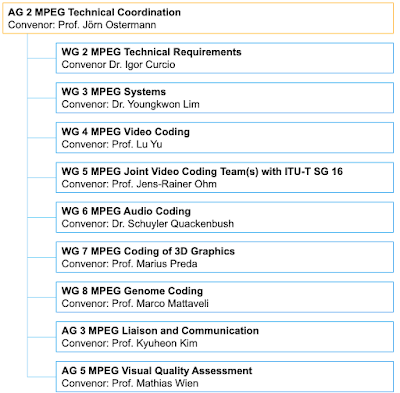 The 132nd MPEG meeting was held as an online meeting and more than 300 participants continued to work efficiently on standards for the future needs of the industry. As a group, MPEG started to explore new application areas that will benefit from standardized compression technology in the future. A new web site has been created and can be found at http://mpeg.org/.

The official press release can be found here and comprises the following items:

In this report, I’d like to focus on VVC, G-PCC, DASH/CMAF, OMAF, and LCEVC.

MPEG completed a verification testing assessment of the recently ratified Versatile Video Coding (VVC) standard for ultra-high definition (UHD) content with standard dynamic range, as may be used in newer streaming and broadcast television applications. The verification test was performed using rigorous subjective quality assessment methods and showed that VVC provides a compelling gain over its predecessor -- the High Efficiency Video Coding (HEVC) standard produced in 2013. In particular, the verification test was performed using the VVC reference software implementation (VTM) and the recently released open-source encoder implementation of VVC (VVenC):
Additionally, the standardization work for both conformance testing and reference software for the VVC standard reached its first major milestone, i.e., progressing to the Committee Draft ballot in the ISO/IEC approval process. The conformance testing standard (ISO/IEC 23090-15) will ensure interoperability among the diverse applications that use the VVC standard, and the reference software standard (ISO/IEC 23090-16) will provide an illustration of the capabilities of VVC and a valuable example showing how the standard can be implemented. The reference software will further facilitate the adoption of the standard by being available for use as the basis of product implementations.

Research aspects: as for every new video codec, its compression efficiency and computational complexity are important performance metrics. While the reference software (VTM) provides a valid reference in terms of compression efficiency it is not optimized for runtime. VVenC seems to provide already a significant improvement and with x266 another open source implementation will be available soon. Together with AOMedia's AV1 (including its possible successor AV2) we are looking forward to a lively future in the area of video codecs.

MPEG promoted its ISO/IEC 23090-9 Geometry-based Point Cloud Compression (G-PCC) standard to the Final Draft International Standard (FDIS) stage. G-PCC addresses lossless and lossy coding of time-varying 3D point clouds with associated attributes such as color and material properties. This technology is particularly suitable for sparse point clouds. ISO/IEC 23090-5 Video-based Point Cloud Compression (V-PCC), which reached the FDIS stage in July 2020, addresses the same problem but for dense point clouds, by projecting the (typically dense) 3D point clouds onto planes, and then processing the resulting sequences of 2D images using video compression techniques. The generalized approach of G-PCC, where the 3D geometry is directly coded to exploit any redundancy in the point cloud itself, is complementary to V-PCC and particularly useful for sparse point clouds representing large environments.
Point clouds are typically represented by extremely large amounts of data, which is a significant barrier to mass-market applications. However, the relative ease of capturing and rendering spatial information compared to other volumetric video representations makes point clouds increasingly popular for displaying immersive volumetric data. The current draft reference software implementation of a lossless, intra-frame G‐PCC encoder provides a compression ratio of up to 10:1 and lossy coding of acceptable quality for a variety of applications with a ratio of up to 35:1.
By providing high immersion at currently available bit rates, the G‐PCC standard will enable various applications such as 3D mapping, indoor navigation, autonomous driving, advanced augmented reality (AR) with environmental mapping, and cultural heritage.

Research aspects: the main research focus related to G-PCC and V-PCC is currently on compression efficiency but one should not dismiss its delivery aspects including its dynamic, adaptive streaming. A recent paper on this topic has been published in the IEEE Communications Magazine and is entitled "From Capturing to Rendering: Volumetric Media Delivery With Six Degrees of Freedom".

MPEG Finalizes the Harmonization of DASH and CMAF

MPEG successfully completed the harmonization of Dynamic Adaptive Streaming over HTTP (DASH) with Common Media Application Format (CMAF) featuring a DASH profile for the use with CMAF (as part of the 1st Amendment of ISO/IEC 23009-1:2019 4th edition).
CMAF and DASH segments are both based on the ISO Base Media File Format (ISOBMFF), which per se enables smooth integration of both technologies. Most importantly, this DASH profile defines (a) a normative mapping of CMAF structures to DASH structures and (b) how to use Media Presentation Description (MPD) as a manifest format.
Additional tools added to this amendment include
It is expected that the 5th edition of the MPEG DASH standard (ISO/IEC 23009-1) containing this change will be issued at the 133rd MPEG meeting in January 2021. An overview of DASH standards/features can be found in the Figure below. 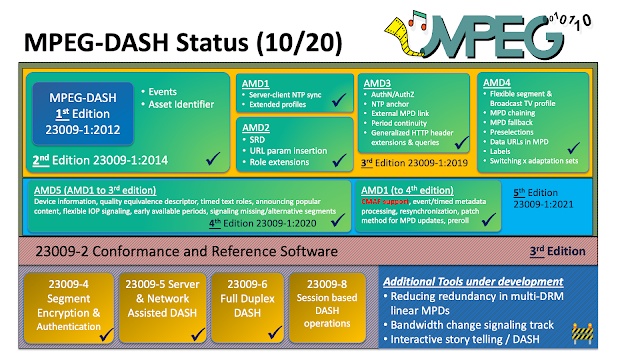 Research aspects: one of the features enabled by CMAF is low latency streaming that is actively researched within the multimedia systems community (e.g., here). The main research focus has been related to the ABR logic while its impact on the network is not yet fully understood and requires strong collaboration among stakeholders along the delivery path including ingest, encoding, packaging, (encryption), content delivery network (CDN), and consumption. A holistic view on ABR is needed to enable innovation and the next step towards the future generation of streaming technologies (https://athena.itec.aau.at/).

MPEG completed the standardization of the 2nd edition of the Omnidirectional MediA Format (OMAF) by promoting ISO/IEC 23009-2 to Final Draft International Standard (FDIS) status including the following features:

Research aspects: standards usually define formats to enable interoperability but various informative aspects are left open for industry competition and subject to research and development. The same holds for OMAF and its 2nd edition enables researchers and developers to work towards efficient viewport-adaptive implementations focusing on the users' viewport.

MPEG is pleased to announce the completion of the new ISO/IEC 23094-2 standard, i.e., Low Complexity Enhancement Video Coding (MPEG-5 Part 2 LCEVC), which has been promoted to Final Draft International Standard (FDIS) at the 132nd MPEG meeting.

Research aspects: LCEVC provides a kind of scalable video coding by combining hardware- and software-based decoders that allows for a certain flexibility as part of regular software life cycle updates. However, LCEVC has been never compared to Scalable Video Coding (SVC) and Scalable High Efficiency Video Coding (SHVC) which could be an interesting aspect for future work.

The 133rd MPEG meeting will be again an online meeting in January 2021.
Click here for more information about MPEG meetings and their developments.
Posted by Christian Timmerer at 8:10 PM