Because of the Covid-19 pandemic, the 130th MPEG meeting has been converted from a physical meeting to a fully online meeting, the first in MPEG’s 30+ years of history. Approximately 600 experts attending from 19 time zones worked in tens of Zoom meeting sessions supported by an online calendar and by collaborative tools that involved MPEG experts in both online and offline sessions. For example, input contributions had to be registered and uploaded ahead of the meeting to allow for efficient scheduling of two-hour meeting slots, which have been distributed from early morning to late night in order to accommodate experts working in different time zones as mentioned earlier. These input contributions have been then mapped to GitLab issues for offline discussions and the actual meeting slots have been primarily used for organizing the meeting, resolving conflicts, and making decisions including approving output documents. Although the productivity of the online meeting could not reach the level of regular face-to-face meetings, the results posted in the press release show that MPEG experts managed the challenge quite well, specifically
Other Important Activities at the 130th MPEG meeting: (i) the carriage of visual volumetric video-based coding data, (ii) Network-Based Media Processing (NBMP) function templates, (iii) the conversion from MPEG-21 contracts to smart contracts, (iv) deep neural network based video coding, (v) Low Complexity Enhancement Video Coding (LCEVC) reaching DIS stage, and (vi) a new level of the MPEG-4 Audio ALS Simple Profile for high-resolution audio among others

At its 130th meeting, MPEG announced the completion of the new ISO/IEC 23094-1 standard which is referred to as MPEG-5 Essential Video Coding (EVC) and has been promoted to Final Draft International Standard (FDIS) status. There is a constant demand for more efficient video coding technologies (e.g., due to the increased usage of video on the internet), but coding efficiency is not the only factor determining the industry's choice of video coding technology for products and services. The EVC standard offers improved compression efficiency compared to existing video coding standards and is based on the statements of all contributors to the standard who have committed announcing their license terms for the MPEG-5 EVC standard no later than two years after the FDIS publication date.

The MPEG-5 EVC defines two important profiles, including "Baseline profile" and "Main profile". The "Baseline profile" contains only technologies that are older than 20 years or otherwise freely available for use in the standard. In addition, the "Main profile" adds a small number of additional tools, each of which can be either cleanly disabled or switched to the corresponding baseline tool on an individual basis.

It will be interesting to see how EVC profiles (baseline and main) will find its path into products and services given the existing number of codecs already in use (e.g., AVC, HEVC, VP9, AV1) and those still under development but being close to ratification (e.g., VVC, LCEVC). That is, in total we, may end up with about seven video coding formats that probably need to be considered for future video products and services. In other words, the multi-codec scenario I have envisioned some time ago is becoming reality raising some interesting challenges to be addressed in the future.

Research aspects: as for all video coding standards, the most important research aspect is certainly coding efficiency. For EVC it might be also interesting to research its usability of the built-in tool switching mechanism within a practical setup. Furthermore, the multi-codec issue, the ratification of EVC adds another facet to the already existing video coding standards in use or/and under development.

At the 130th WG11 (MPEG) meeting, the ISOBMFF family of standards has been significantly amended with new tools and functionalities. The standards in question are as follows:
In particular, three new amendments to the ISOBMFF family have reached their final milestone, i.e., Final Draft Amendment (FDAM):
At the same time, new amendments have reached their first milestone, i.e., Committee Draft Amendment (CDAM):
Both are expected to reach their final milestone in mid-2021.

Finally, the final text for the ISO/IEC 14496-12 6th edition Final Draft International Standard (FDIS) is now ready for the ballot after converting MP4RA to the Maintenance Agency. WG11 (MPEG) notes that Apple Inc. has been appointed as the Maintenance Agency and MPEG appreciates its valuable efforts for the many years while already acting as the official registration authority for the ISOBMFF family of standards, i.e., MP4RA (https://mp4ra.org/). The 6th edition of ISO/IEC 14496-12 is expected to be published by ISO by the end of this year.

A New Standard for Large Scale Client-specific Streaming with DASH

Historically, in ISO/IEC 23009 (Dynamic Adaptive Streaming over HTTP; DASH), every client has used the same Media Presentation Description (MPD) as it best serves the scalability of the service (e.g., for efficient cache efficiency in content delivery networks). However, there have been increasing requests from the industry to enable customized manifests for more personalized services. Consequently, MPEG has studied a solution to this problem without sacrificing scalability, and it has reached the first milestone of its standardization at the 130th MPEG meeting.

ISO/IEC 23009-8 adds a mechanism to the Media Presentation Description (MPD) to refer to another document, called Session-based Description (SBD), which allows per-session information. The DASH client can use this information (i.e., variables and their values) provided in the SBD to derive the URLs for HTTP GET requests. This standard is expected to reach its final milestone in mid-2021.

Research aspects: SBD's goal is to enable personalization while maintaining scalability which calls for a tradeoff, i.e., which kind of information to put into the MPD and what should be conveyed within the SBD. This tradeoff per se could be considered already a research question that will be hopefully addressed in the near future.

An overview of the current status of MPEG-DASH can be found in the figure below. 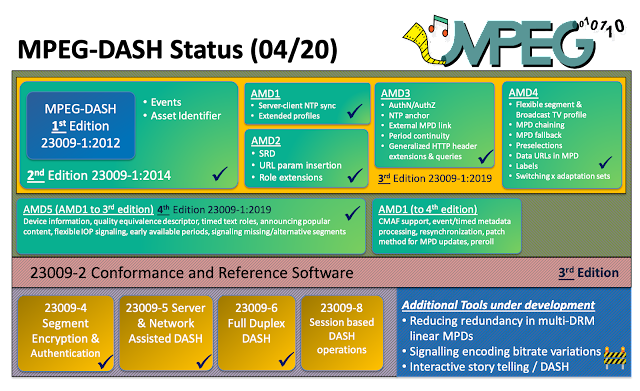 The next MPEG meeting will be from June 29th to July 3rd and will be again an online meeting. I am looking forward to a productive AhG period and an online meeting later this year. I am sure that MPEG will further improve its online meeting capabilities and can certainly become a role model for other groups within ISO/IEC and probably also beyond.
Posted by Christian Timmerer at 9:50 AM