MPEG news: a report from the 131st meeting (virtual)

The 131st MPEG meeting concluded on July 3, 2020, online, again but with a press release comprising an impressive list of news items which is led by

Just in the middle of the SC29 (i.e., MPEG’s parent body within ISO) restructuring process, MPEG successfully ratified -- jointly with ITU-T’s VCEG within JVET -- its next-generation video codec among other interesting results from the 131st MPEG meeting:

The corresponding press release of the 131st MPEG meeting can be found here: https://mpeg-standards.com/meetings/mpeg-131/. This report focused on video coding featuring VVC as well as PCC and systems aspects (i.e., file format, DASH).

MPEG is pleased to announce the completion of the new Versatile Video Coding (VVC) standard at its 131st meeting. The document has been progressed to its final approval ballot as ISO/IEC 23090-3 and will also be known as H.266 in the ITU-T.

VVC is the latest in a series of very successful standards for video coding that have been jointly developed with ITU-T, and it is the direct successor to the well-known and widely used High Efficiency Video Coding (HEVC) and Advanced Video Coding (AVC) standards (see architecture in the figure above). VVC provides a major benefit in compression over HEVC. Plans are underway to conduct a verification test with formal subjective testing to confirm that VVC achieves an estimated 50% bit rate reduction versus HEVC for equal subjective video quality. Test results have already demonstrated that VVC typically provides about a 40%-bit rate reduction for 4K/UHD video sequences in tests using objective metrics (i.e., PSNR, VMAF, MS-SSIM). Application areas especially targeted for the use of VVC include

The current performance of VVC compared to HEVC-HM is shown in the figure below which confirms the statement above but also highlights the increased complexity. Please note that VTM9 is not optimized for speed but functionality (i.e., compression efficiency).

MPEG also announces completion of ISO/IEC 23002-7 “Versatile supplemental enhancement information for coded video bitstreams” (VSEI), developed jointly with ITU-T as Rec. ITU-T H.274. The new VSEI standard specifies the syntax and semantics of video usability information (VUI) parameters and supplemental enhancement information (SEI) messages for use with coded video bitstreams. VSEI is especially intended for use with VVC, although it is drafted to be generic and flexible so that it may also be used with other types of coded video bitstreams. Once specified in VSEI, different video coding standards and systems-environment specifications can re-use the same SEI messages without the need for defining special-purpose data customized to the specific usage context.

At the same time, the Media Coding Industry Forum (MC-IF) announces a VVC patent pool fostering with an initial meeting on September 1, 2020. The aim of this meeting is to identify tasks and to propose a schedule for VVC pool fostering with the goal to select a pool facilitator/administrator by the end of 2020. MC-IF is not facilitating or administering a patent pool.

At the time of writing this blog post, it is probably too early to make an assessment of whether VVC will share the fate of HEVC or AVC (w.r.t. patent pooling). AVC is still the most widely used video codec but with AVC, HEVC, EVC, VVC, LCEVC, AV1, (AV2), and probably also AVS3 -- did I miss anything? -- the competition and pressure are certainly increasing.

Research aspects: from a research perspective, reduction of time-complexity (for a variety of use cases) while maintaining quality and bitrate at acceptable levels is probably the most relevant aspect. Improvements in individual building blocks of VVC by using artificial neural networks (ANNs) are another area of interest but also end-to-end aspects of video coding using ANNs will probably pave the roads towards the/a next generation of video codec(s). Utilizing VVC and its features for HTTP adaptive streaming (HAS) is probably most interesting for me but maybe also for others...

At its 131st meeting, MPEG promoted its Video-based Point Cloud Compression (V-PCC) standard to the Final Draft International Standard (FDIS) stage. V-PCC addresses lossless and lossy coding of 3D point clouds with associated attributes such as colors and reflectance. Point clouds are typically represented by extremely large amounts of data, which is a significant barrier for mass-market applications. However, the relative ease to capture and render spatial information as point clouds compared to other volumetric video representations makes point clouds increasingly popular to present immersive volumetric data. With the current V-PCC encoder implementation providing compression in the range of 100:1 to 300:1, a dynamic point cloud of one million points could be encoded at 8 Mbit/s with good perceptual quality. Real-time decoding and rendering of V-PCC bitstreams have also been demonstrated on current mobile hardware.
The V-PCC standard leverages video compression technologies and the video ecosystem in general (hardware acceleration, transmission services, and infrastructure) while enabling new kinds of applications. The V-PCC standard contains several profiles that leverage existing AVC and HEVC implementations, which may make them suitable to run on existing and emerging platforms. The standard is also extensible to upcoming video specifications such as Versatile Video Coding (VVC) and Essential Video Coding (EVC).
The V-PCC standard is based on Visual Volumetric Video-based Coding (V3C), which is expected to be re-used by other MPEG-I volumetric codecs under development. MPEG is also developing a standard for the carriage of V-PCC and V3C data (ISO/IEC 23090-10) which has been promoted to DIS status at the 130th MPEG meeting.
By providing high-level immersiveness at currently available bandwidths, the V-PCC standard is expected to enable several types of applications and services such as six Degrees of Freedom (6 DoF) immersive media, virtual reality (VR) / augmented reality (AR), immersive real-time communication and cultural heritage.
Research aspects: as V-PCC is video-based, we can probably state similar research aspects as for video codecs such as improving efficiency both for encoding and rendering as well as reduction of time complexity. During the development of V-PCC mainly HEVC (and AVC) has/have been used but it is definitely interesting to use also VVC for PCC. Finally, the dynamic adaptive streaming of V-PCC data is still in its infancy despite some articles published here and there.

Finally, I’d like to share news related to MPEG systems and the carriage of video data as depicted in the figure below. In particular, the carriage of VVC (and also EVC) has been now enabled in MPEG-2 Systems (specifically within the transport stream) and in the various file formats (specifically within the NAL file format). The latter is used also in CMAF and DASH which makes VVC (and also EVC) ready for HTTP adaptive streaming (HAS).

What about DASH and CMAF?

CMAF maintains a so-called "technologies under consideration" document which contains -- among other things -- a proposed VVC CMAF profile. Additionally, there are two exploration activities related to CMAF, i.e., (i) multi-stream support and (ii) storage, archiving, and content management for CMAF files.
DASH works on potential improvement for the first amendment to ISO/IEC 23009-1 4th edition related to CMAF support, events processing model, and other extensions. Additionally, there’s a working draft for a second amendment to ISO/IEC 23009-1 4th edition enabling bandwidth change signaling track and other enhancements. Furthermore, ISO/IEC 23009-8 (Session-based DASH operations) has been advanced to Draft International Standard (see also my last report).
An overview of the current status of MPEG-DASH can be found in the figure below. 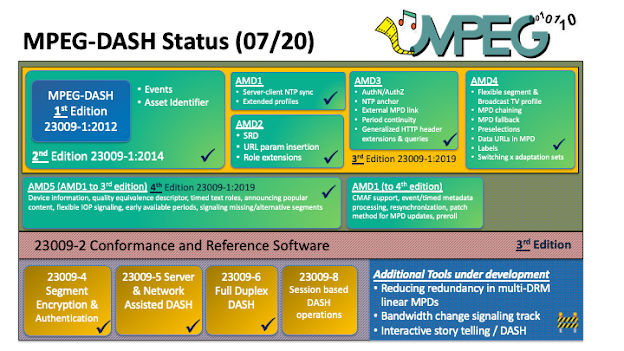 The next meeting will be again an online meeting in October 2020.
Finally, MPEG organized a Webinar presenting results from the 131st MPEG meeting. The slides and video recordings are available here: https://bit.ly/mpeg131.
Click here for more information about MPEG meetings and their developments.
Posted by Christian Timmerer at 10:29 PM

I really love to read your article. Nice