The Joint Video Experts Team (JVET), a collaborative team formed by MPEG and ITU-T Study Group 16’s VCEG, commenced work on a new video coding standard referred to as Versatile Video Coding (VVC). The goal of VVC is to provide significant improvements in compression performance over the existing HEVC standard (i.e., typically twice as much as before) and to be completed in 2020. The main target applications and services include — but not limited to — 360-degree and high-dynamic-range (HDR) videos. In total, JVET evaluated responses from 32 organizations using formal subjective tests conducted by independent test labs. Interestingly, some proposals demonstrated compression efficiency gains of typically 40% or more when compared to using HEVC. Particular effectiveness was shown on ultra-high definition (UHD) video test material. Thus, we may expect compression efficiency gains well-beyond the targeted 50% for the final standard.

Research aspects: Compression tools and everything around it including its objective and subjective assessment. The main application area is clearly 360-degree and HDR. Watch out conferences like PCS and ICIP (later this year), which will be full of papers making references to VVC. Interestingly, VVC comes with a first draft, a test model for simulation experiments, and a technology benchmark set which is useful and important for any developments for both inside and outside MPEG as it allows for reproducibility.

Research aspects: This project reminds me a lot about what has been done in the past in MPEG-21, specifically Digital Item Adaptation (DIA) and Digital Item Processing (DIP). The main difference is that MPEG targets APIs rather than pure metadata formats, which is a step forward into the right direction as APIs can be implemented and used right away. NBMP will be particularly interesting in the context of new networking approaches including, but not limited to, software-defined networking (SDN), information-centric networking (ICN), mobile edge computing (MEC), fog computing, and related aspects in the context of 5G.

The partial file format enables the description of an ISOBMFF file partially received over lossy communication channels. This format provides tools to describe reception data, the received data and document transmission information such as received or lost byte ranges and whether the corrupted/lost bytes are present in the file and repair information such as location of the source file, possible byte offsets in that source, byte stream position at which a parser can try processing a corrupted file. Depending on the communication channel, this information may be setup by the receiver or through out-of-band means.

ISOBMFF's sample variants (2nd edition), which are typically used to provide forensic information in the rendered sample data that can, for example, identify the specific Digital Rights Management (DRM) client which has decrypted the content. This variant framework is intended to be fully compatible with MPEG’s Common Encryption (CENC) and agnostic to the particular forensic marking system used.

Research aspects: MPEG systems standards are mainly relevant for multimedia systems research with all its characteristics. The partial file format is specifically interesting as it targets scenarios with lossy communication channels.

MPEG-G provides a set of standards enabling interoperability for applications and services dealing with high-throughput deoxyribonucleic acid (DNA) sequencing. At its 122nd meeting, MPEG promoted its core set of MPEG-G specifications, i.e., transport and compression technologies, to Draft International Standard (DIS) stage. Such parts of the standard provide new transport technologies (ISO/IEC 23092-1) and compression technologies (ISO/IEC 23092-2) supporting rich functionality for the access and transport including streaming of genomic data by interoperable applications. Reference software (ISO/IEC 23092-4) and conformance (ISO/IEC 23092-5) will reach this stage in the next 12 months.

Research aspects: the main focus of this work item is compression and transport is still in its infancy. Therefore, research on the actual delivery for compressed DNA information as well as its processing is solicited. 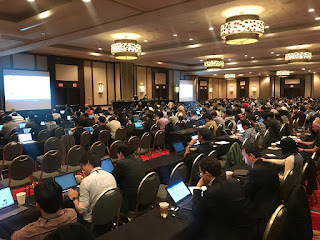 What else happened at MPEG122?

Research aspects: In this section I would like to focus on DASH, CMAF, and OMAF. Multi-stream support, as mentioned above, is relevant for tiled streaming and multi-channel audio which has been recently studied in the literature and is also highly relevant for industry. The efficient storage and streaming of such kind of content within the file format is an important aspect and often underrepresented in both research and standardization. The goal here is to keep the overhead low while maximizing the utility of the format to enable certain functionalities. OMAF now targets the social VR use case, which has been discussed in the research literature for a while and, finally, makes its way into standardization. An important aspect here is both user and quality of experience, which requires intensive subjective testing.

Finally, on May 10 MPEG will celebrate 30 years as its first meeting dates back to 1988 in Ottawa, Canada with around 30 attendees. The 122nd meeting had more than 500 attendees and MPEG has around 20 active work items. A total of more than 170 standards have been produces (that’s approx. six standards per year) where some standards have up to nine editions like the HEVC standards. Overall, MPEG is responsible for more that 23% of all JTC 1 standards and some of them showing extraordinary longevity regarding extensions, e.g., MPEG-2 systems (24 years), MPEG-4 file format (19 years), and AVC (15 years). MPEG standards serve billions of users (e.g., MPEG-1 video, MP2, MP3, AAC, MPEG-2, AVC, ISOBMFF, DASH). Some — more precisely five — standards have receive Emmy awards in the past (MPEG-1, MPEG-2, AVC (2x), and HEVC).
Thus, happy birthday MPEG! In today’s society starts the high performance era with 30 years, basically the time of “compression”, i.e., we apply all what we learnt and live out everything, truly optimistic perspective for our generation X (millennials) standards body!
Posted by Christian Timmerer at 1:22 PM