MPEG news: a report from the 87th meeting in Lausanne, Switzerland

MPEG’s high-performance video coding (HVC) standard is evolving and currently targets mobile devices, IPTV, and Ultra-HD. However, the trade-off between coding efficiency and codec complexity is still driving the thresholds which has been set at this meeting, well, at least initially. For low-complexity HVC is seeking for 25% gain in coding efficiency and for full-/increased-complexity the threshold is set to 50% gain in coding efficiency (cf. goal for AVC standardization). The application scenarios range from shared Ultra-HD to personalized experiences. The latter is targeting a viewing distance of 0.5*h (i.e., 50cm) and for personal use only. A vision document (N10361) has been issued at this meeting and interested parties are requested to join the Ad-hoc Group (AhG) for further discussions (N10371). One open issue with HVC is whether and how audio will adapt to these new developments, probably with high-performance audio coding (HAC) or can HE-AAC already complement HVC? Anyway, short viewing distance ultimately leads to short listening distances and a wide angle for the sound stage...

3D video coding (3DVC) has already a history within MPEG. A vision document has been produced here stating that MPEG’s version of 3D video shall be compatible with existing standards, mono/stereo devices, and existing/planned infrastructure. While the former seems to be very clear, i.e., backwards compatibility to AVC is desirable in the same way as it was for SVC, the latter needs some more discussions. How can one be compatible with planned infrastructures?

In the area of advanced IPTV terminal (AIT) we had a productive meeting with ITU-T SG16 Q.13. The objectives look very promising and aim to increase the user experience thanks to the usage of latest media coding, transport, and processing technologies. An AhG has been set up to discuss the details. Again, AhGs are open to the public and everyone can join and contribute. 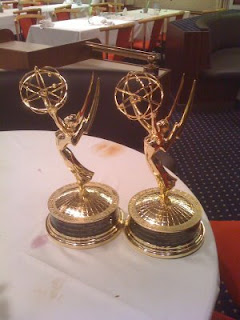 The information exchange with virtual worlds (MPEG-V) has merged with the representation of sensory effects (RoSE) and will be now jointly developed under the umbrella of MPEG-V. However, it was sought that ‘information exchange with virtual worlds’ is no longer appropriate and they’re seeking for a new name. Any inputs are welcome and are discussed within the AhG that is open to everybody. Thus, join this exciting activity now! In its current working draft the following sensory effects are defined which shall create an enhanced, immersive user experience: various light effects, temperature, wind, vibration, water sprayer, perfumer/scent, fog, window blind/shadow, sound, and color correction.

Finally, MPEG got another Emmy, the "Technology and Engineering Emmy Award 2007-2008" for MPEG-4 AVC from the National Academy of Television Arts & Sciences (NATAS). It seems that success within MPEG is from now on measured in terms of number of awards received ;-) And last but not least, if you’ve been ever interested in the MPEG vision, you may find it here.
Posted by Christian Timmerer at 10:00 PM